What is an “American Corgi”? 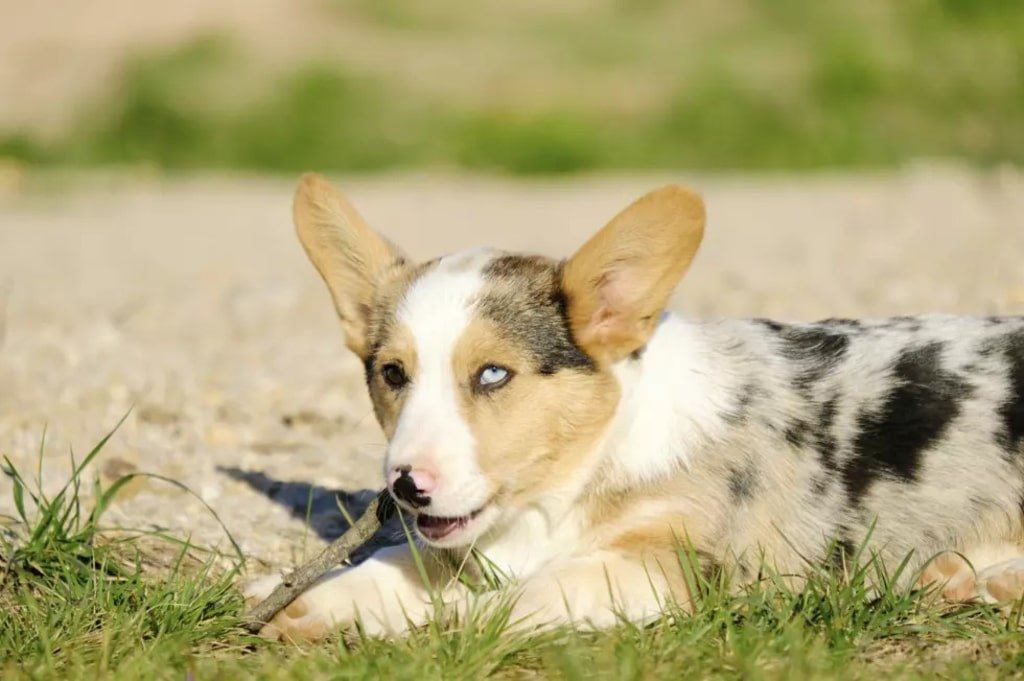 There are two recognized/established breeds of Corgi:

An “American Corgi”, however, is not a breed of corgi

“American Corgis” are actually a mixed breed: a cross between a Pembroke Welsh Corgi and a Cardigan Welsh Corgi.

These two breeds are typically cross-bred by irresponsible (backyard) breeders in an attempt to produce merle-colored dogs with the smaller body and personality of a Pembroke.

This desired look is often referred to as a “Merle Pembroke”.

Despite being bred for a “Merle Pembroke” appearance, “American Corgis” can come in a variety of shapes, sizes, colors, and can either have the temperament and personality of a Pembroke, a Cardigan, or a combination of the two.

These kinds of dogs that are mixed primarily for appearance are commonly referred to as “designer breeds” or “designer mutts”.

The intentional breeding of “American Corgis” is considered highly unethical.

Breeders that produce “American Corgis” typically prey on unsuspecting and uninformed puppy buyers by charging obscene prices for cross-bred puppies which they market as “purebred corgis with rare coloring”.

In reality, crossing Pembrokes and Cardigans can produce unpredictable puppies, many of which suffer from long-term behavioral and/or health problems

They each have their own unique histories and lineage.

The Pembroke Welsh Corgi is thought to descend from members of the Spitz family, brought to Wales when Flemish weavers settled in the Welsh county of Pembrokeshire in the 12th century.

The Cardigan Welsh Corgi was developed separately in Cardiganshire and descends from the Teckel (hound) family.

Pembrokes and Cardigans are fundamentally two separate and unique breeds that are historically, structurally, and behaviorally very different from each other.

The most obvious difference in appearance between the two breeds is their tail.

Cardigans have long, foxlike tails whereas Pembrokes typically have their tails docked close to their bodies.

Pembrokes are the smaller of the two, weighing in at roughly 20-30 lbs. Their coats only come in red, sable, fawn, red-headed tricolor, and black-headed tricolor.

Cardigans are usually a bit heavier. They typically weigh anywhere between 25-40 lbs. Their coats come in a variety of colors: brindle, black and white with brindle or tan points, red and sable with white markings, and blue merle.

When it comes to personalities and temperament, Pembrokes are a high-energy, sometimes overly friendly, outgoing breed.

Cardigans, on the other hand, are a bit more laid back.

They generally have less energy than Pembrokes and can be more reserved in new situations.

Are American Corgis a Breed?

No. American Corgis are not considered an established breed, nor are they recognized by the American Kennel Club (or any other legitimate dog registry).

The lack of support from both clubs is largely attributed to the fact that American Corgi breeders have failed to identify exactly what fault they are trying to improve by mixing the two breeds.

When asked about the purpose of this cross-breed, The American Corgi Club Facebook page stated:

“We are still working on it but some of the differences will involve length of back and leg. We hope to produce a more athletic dog, and frankly a healthier one with out the disc problems a very long back is prone to.”

Breed experts question the logic in crossing two breeds predisposed to back problems in an attempt to create a “healthier dog with a healthier back”.

This has only furthered suspicions that “American Corgis” are unethically produced and are solely being bred for their appearance.

You will often hear American Corgi Breeders use gimmicky terminology like “hybrid vigor” to support their claims that they are producing “healthier dogs”.

This couldn’t be further from the truth.

Although both Pembrokes and Cardigans are dwarf breeds, the structural differences between them are significant.

Reputable breeders of Pembrokes and Cardigan will show their dogs in the conformation ring to prove their breeding dogs are structurally sound to reproduce.

Since mixed breed dogs cannot be shown in a conformation ring, American Corgi Breeders would need to prove the conformational (structural) integrity of their breeding dogs in some other way, such as sport/working titles.

However, most American Corgi breeders do not prove the structural soundness of their dogs in any capacity.

This can lead to the breeding of dogs that are not structurally sound and, as a result, the puppies they produce are highly predisposed to physical injury.

Despite striving to produce a “healthier” dog, American Corgi breeders typically fail to perform the basic preventative health tests required by both the PWCCA and the CWCCA.

These tests/health clearances include all of, but are not limited to:

These tests are crucial to ensuring hereditary and preventable diseases are not being passed on to future offspring.

Testing is even more important when we are considering mixed breed dogs like American Corgis.

American Corgis are susceptible to diseases that are present in both Pembrokes and Cardigans.

This means that a disease found only in Pembrokes or only in Cardigans can both be present in American Corgis.

The Risks of Double Merle

A double merle is a puppy that receives the merle gene from both parents.

This causes the dog to be blind, deaf, or both.

Due to their birth defects, many of these dogs end up in rescues, but most are euthanized by their breeders.

Until American Corgi Breeders make drastic changes in their breeding practices, reevaluate the dogs they are breeding, and start implementing thorough health clearances and testing, they will continue to be referred to as unethical, irresponsible, and backyard breeders.

If a breeder is marketing a merle dog as a PWC, then that dog is likely mixed with another breed that carries the merle coat gene and is not a purebred PWC.

Cardigan Welsh Corgis, on the other hand, are able to naturally carry a merle coat gene and therefore merle Cardigans can be purebred.

Were Pembrokes ever merle?

One of the arguments that is frequently used to justify merle Pembrokes is that centuries ago, when Cardigans and Pembrokes were bred together, Pembrokes carried the ‘blue gene’.

However, they fail to mention in Pembrokes, “blue” does not mean blue merle.

In Pembrokes, ‘blue” is a slang term to describe dogs with dilute coats.

These diluted dogs have a distinct smokey cast over their coats and their nose/eyelids will also be slate grey/blue or liver-colored depending on their coat color. (hence the term “bluey/bluie”)

A dilute coat can be inherited by any dog independent of coat color, it simply needs to inherit two copies of the dilute gene (one from each parent)

When it comes to a blue merle coat color, Pembrokes are genetically incapable of carrying the merle coat gene.

In other words, that means if a corgi is merle colored, it cannot be a purebred Pembroke. It’s physically impossible.

If you are interested in the characteristics of an “American Corgi”, then you are likely interested in a small to mid-sized herding breed dog.

There are many purebred dogs, produced by ethical preservation breeders, that would be a great alternative for you and your family to consider.

These dogs are the result of dangerous breeding practices.

Due to the inherent risk of mixing two different dogs, the practice of breeding American Corgis has to be done responsibly and carefully.

Unfortunately, a majority of American Corgi breeders do not prove their dogs, and even more fail to accomplish the minimum health tests as required by Cardigan and Pembroke parent clubs.

The production of unhealthy and untested dogs that are susceptible to all of the risks and diseases found in BOTH Pembrokes and Cardigans, in the hope of creating a “new breed” with a merle coat color.

There is certainly one that already exists that fits your family’s needs.

Do not support irresponsible American Corgi breeders, do your due diligence, and find a dog breed that is ethically bred and right for you or your family!