Why Do Corgis Sploot? Everything You Need To Know 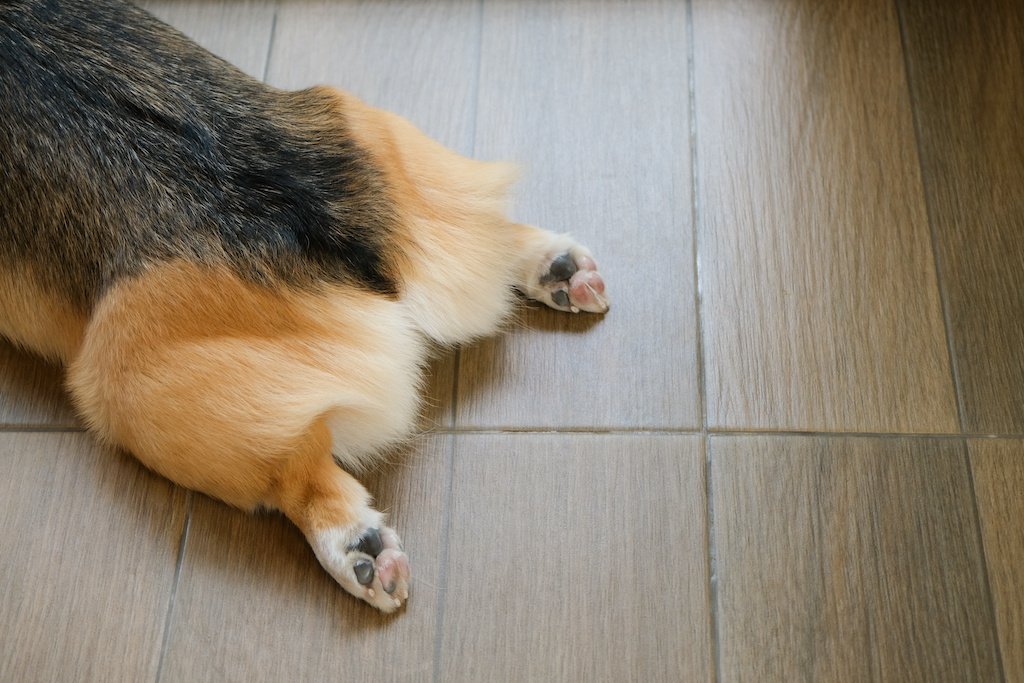 A Corgi sploot is something almost every Corgi lover is familiar with. Even if your own dog doesn’t do it, you’ve probably seen other splooting Corgis all over social media.

In this article, we are going to explore this phenomenon, and have a look at what splooting is, why Corgis do it and whether it can negatively effect them.

What Is a Corgi Sploot?

You might be unfamiliar with the concept of splooting, or perhaps you’ve seen it but you didn’t know it had a name?

A Corgi sploot is when your dog lies on its stomach and stretches its legs back and away from the body. It can be done with one leg or both legs at once.

Some dogs may also sploot with their thighs and legs out to the side, giving them an almost frog-like appearance that is both funny and a little strange.

Some dog breeds, like the Pembroke and Cardigan Corgis, are more prone to splooting. If you share your home with one of these adorable, short-legged fur friends, it’s likely you’ve observed it more than once.

While some dogs may remain in this position while they sleep or for a prolonged period of time, others may just do it temporarily while stretching.

Puppies tend sploot more than adult dogs. Corgis can usually sploot also as adults, some dogs may lose their ability as they grow older.

Why Corgis (and Other Dog Breeds) Sploot

Splooting is adorable, but why do Corgis do it?

The best way to explain this particular position is simply that they find it comfortable.

When splooting, Corgis get a chance to stretch their limbs and relax, and it helps to keep them flexible!

Humans stretch too, and many believe that splooting is like yoga for dogs.

Cooling off is another reason for Corgis to sploot!

On hot days, laying in a position where their whole belly touches the floor can feel great while also helping to reduce their body temperature, as the floor is often the coolest place in the house.

Different Variations of the Sploot

There is more than just one way for dogs to sploot! Let’s have a look at few examples.

A half sploot is when the dog sploots with only one leg.

The other leg remains under the body, just like a dog normally positions itself when lying down, with the other hind leg stretched out.

This is more commonly seen as a way to stretch rather than when the dog is fast asleep.

The full sploot is when both legs stretch out behind the dog, and some Corgis (and especially puppies) may even sploot with both their front and hind legs!

This is usually known as a “Pancake Sploot.” A dog in full sploot can look like a flat pancake lying on the floor, but we will talk more about alternative names for this phenomenon in a minute.

Splooting on the Back vs. the Front

A reverse sploot (also known as an upside-down sploot) is when your Corgi lies on its back instead of on its belly, while also extending the legs out behind the body.

This position is not as commonly performed as the belly sploot, but Corgis do appear to be breeds more prone to suddenly flop over on their backs for a much-needed stretch.

Popular Variations of the Name

Is the term “sploot” still not ringing a bell? You might know this act by one of its alternative names. Below are a couple of examples.

My Corgi Does Not Sploot—Why?

There is no need to panic if your Corgi isn’t known to sploot!

While it is very common for the breed to flop down on their belly whenever they get the chance, there are some dogs that simply prefer other sleeping positions.

In order to sploot, a dog also needs to have certain flexibility in the the hip, and if your dog is older or simply lacks the necessary flexibility, it likely won’t sploot.

After all, it is known as a comfortable position for the dogs that do, and dogs that find it uncomfortable will look for other ways to rest and stretch.

You should never try to make a Corgi sploot if it isn’t something it does naturally, as it could harm your dog, no matter how cute it looks.

Can Splooting Be Bad?

There is little to nothing indicating that splooting could be bad for your Corgi, and it is considered a good sign for a dog to have that type of movement in their hips.

However, a dog that normally sploots and suddenly stops could be a cause for concern. It could indicate that it is experiencing pain or discomfort.

Other Dog Breeds Known to Sploot

Are Corgi breeds the only dog breeds that sploots? The answer is no!

While Corgis have made the sploot famous thanks to adorable social media photos and media presence, there are many other dog breeds that are also known to do it.

In theory, any dog breed could sploot, and especially as puppies. However, some breeds are more likely to be splooters continuously throughout their lives.

The Corgi Sploot on Social Media

The sensation of a splooting Corgi has social media to thank, and you can barely go on Instagram, TikTok, Facebook or other platforms without finding photos of adorable dogs living their best splooting life.

If you search for the hashtags #sploot or #splooting, most of the dogs popping up are likey going to be Corgis.

Corgis sploot because they like it and because it’s comfortable. It’s not a cause for concern unless you notice a sudden change in how your Corgi positions itself when lying down.

If you have any doubts, it is always best to consult a veterinarian for clarify.

Splooting is adorable, and if your Corgi doesn’t sploot or if you don’t own a Corgi—social media is the ideal place to get your daily fix of splooting fur friends.